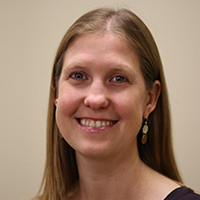 Karen Manship is a Principal Researcher with the American Institutes for Research focusing on early childhood program evaluations and policy. She serves as the Project manager for the DLL Pilot Study, and previously served as the Project Manager of the Study of California’s Transitional Kindergarten (TK) Program, which examined the implementation of TK in the state in its first year and then outcomes for participating children, with a focus on English learners. Her prior work on dual language learners has included a case study of the SEAL program in Redwood City, CA, a Packard-foundation study of practices with DLLs in preschool classrooms, and an evaluation of the First 5 LA Family Literacy Initiative (Deputy Project Director). Her work in early childhood has focused largely in California. In early 2015, she co-authored a policy brief analyzing data on children and program enrollment in California to recommend to the state of California areas of greatest unmet need for preschool, where newly approved State Preschool slots might be sited. She is the co-author of a recent journal article The effects prekindergarten for Spanish-speaking dual language learners: Evidence from California’s transitional kindergarten program in a special issue of Early Childhood Research Quarterly. Ms. Manship received her Master’s degree in Urban Affairs and Public Policy from the University of Delaware.